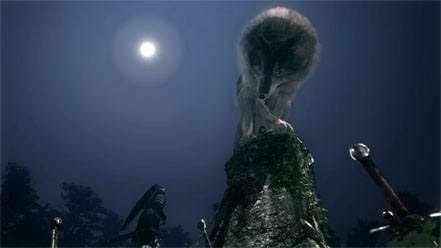 40 hours into my play through, I'm still not sure if I like this game.  At first, it felt like every step of the way was a struggle.  That doesn't seem to be the case anymore.  While many of the enemies from the early game are still a threat, my character is over leveled for where I'm at in the main campaign, so random enemies aren't that scary.

The world seems to have slowly opened up, to where if one section is overly difficult or frustrating me, I can usually go fight a boss in another direction.  This is definitely a plus.  Slowly but surely I'm continuously making progress.  The other night, I was struggling with a boss, and threatened to quit playing the game altogether.  Then I defeated it.

The difficulty actually isn't that bad, aside from the "let's intentionally make the game harder" mechanics like the inability to pause and the terrible souls mechanic, the game is pretty balanced.  Leveling up and upgrading gear takes forever, but it does a good job of making unbeatable bosses a little bit more beatable.  When I defeat an enemy, even after leveling up and looking up strategies online, it rarely feels hollow the way some games' boss fights feel once you figure out the trick.  It seems like they could easily maintain the same balance while offering experience points that can't be taken away though.

It's an Xbox Live free multiplayer weekend or something right now, so when I went to play last night, all of the online features became available.  This basically amounted to way too many notes on the ground that just said "Need Head."  I know there are other online functions, but I have no desire to play this game online.  The fact that I can't turn off the online functionality inside of the game is pretty frustrating as well.  I'm sure there's a way to do it, but it's not that big of a deal.

In spite of everything, I'm still playing the game.  There's something to the monotony and grindy nature of the game that appeals to me.  Leveling up and increasing stats in given areas is pretty nice too.  The customization isn't as good as something like Skyrim, but I'm still playing the character I want to play.  My character clearly is not the path of least resistance character.  I'm not strong enough to wield a shield, and the bow seems to be either useless or broken in practice.  I also don't really want to mess with magic.  I just want to be an agile character who can use a bow and moves quicker than my enemies.  Maybe this is why I'm a little bit more forgiving on the general difficulty of the game.

I'll write at least one more entry when I either finish or rage quit the game.  In the meantime, I did just start Breath of the Wild to break things up, and I need to put some time into Battlefront ASAP for the next Katarn Collection.  Video games are fun.
Posted by KendallCast at 4:11 AM