Kendall, Molly and Sarah discuss The Way by Fastball, a song about an old couple who ran off and died in a ravine.


Posted by KendallCast at 1:20 PM No comments:

When did the Simpsons get bad? Part 2 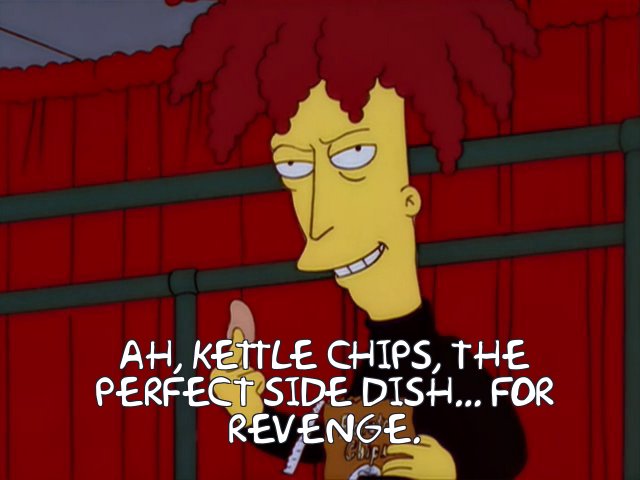 So if Season 11 isn’t where The Simpsons got bad, when did it get bad?  Another random internet forum I stumbled on seemed convinced that the quality dropped drastically midway through Season 12.


Today’s three episodes begin with season 12, episode 11, the appropriately titled “Worst Episode Ever.”  In the typical fashion of The Simpsons, the first few scenes have little to do with the rest of the episode.  Bart and Milhouse get banned from the comic book store when they keep Comic Book Guy from ripping off Martin’s mom on a box of rare Star Wars items.  A heart attack forces Comic Book Guy (for some reason) to let Bart and Milhouse run the store.  I wouldn’t call this episode a classic, but I do always enjoy Comic Book Guy spotlights, even if he’s a pretty negative nerd stereotype.
Favorite Quote:  Comic Book Guy’s shirt “My other shirt is clean”
Season 12, episode 12 is “Tennis the Menace.”  This one’s a little harder to defend.  For some reason, Homer decides to put a tennis court in their backyard, which leads to everyone in town wanting to come play tennis.  They’re enjoying themselves, but Homer just isn’t that good at tennis and doesn’t care to improve.  The episode culminates in Venus and Serena Williams teaming up with Andre Agassi and the other famous Tennis player (who really cares?) in a doubles match.  The episode has some good moments, but especially paired with the previous episode, there’s a little too much nonsense and not enough heart to even call it a good Simpsons episode.
Favorite Quote:  "He thought that the trip to the guillotine factory was just for fun, but it gave them the perfect excuse to shoot him."

Episode 13 is “Day of the Jackanapes.”  This is an undisputed classic.  It may be the most memorable Side Show Bob episode I can think of.  Side show Bob gets out of jail, moves into a storage unit, does the morning announcement, and tries to use Bart to blow up Krusty.  You remember the episode
Favorite Quote:  “Ah, kettle chips, the perfect side dish... for revenge!”
So we had a few stinkers, but “Day of the Jackanapes” redeems the others.  I’ll definitely have to watch more episodes from this season to see whether the bad tennis episode or the good Side Show Bob episode is the exception.  Either way, these episodes do not even come close to “should have been canceled” status.

Posted by KendallCast at 6:05 AM No comments:

When did The Simpsons get bad? Part 1 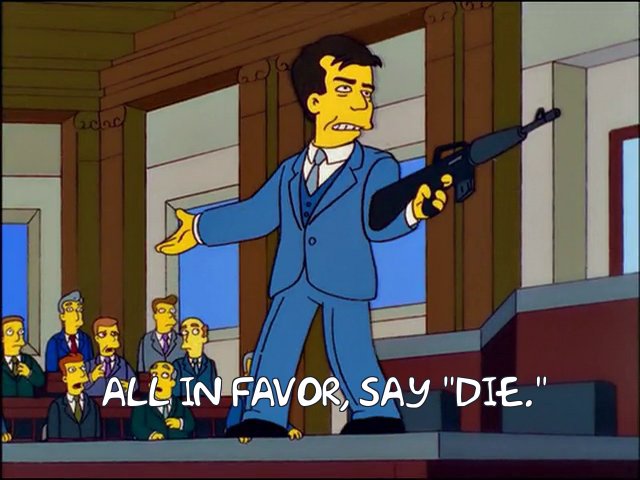 I’ve been hearing a lot about “When The Simpsons got bad” lately.  It’s a debate that seems to come up at least in passing on several of the podcasts I listen to from time to time.  This inspired me to start doing some of my own research and maybe write a series of blog posts about my takeaways.  Basically, I’m going to watch three or so episodes per blog post and review why they may or may not bring me closer to the mythical tipping point.  My hypothesis going in is that the show has always been great, but there was definitely a slump somewhere between the undisputed classics and the still excellent, if occasionally out of touch, show we have today.


I started at the beginning of Season 11.  It makes sense that this might be where quality might drop off.  The show had been on for over a decade, and it was the end of the millennium.  If we think of The Simpsons as primarily a relic of the 90s, this would be a prime season to arbitrarily decide the show got bad.


The Season Premiere, “Beyond Blunderdome” features guest star Mel Gibson asking Homer for help re-shooting a remake of “Mr. Smith Goes To Washington.”  The Simpsons go to Hollywood, Homer suggests all kinds of crazy things to add to the movie, and hijinks ensue.  This episode isn’t one of my top ten of all time, and it definitely loses points for some of the stuff Mel Gibson did in the years to follow, but It’s got some iconic moments.  If the season went downhill from here, this could have been the beginning of the end, but the next few episodes were great!
Favorite quote:  “All in favor?  Say Die!”


Episode 2, “Brother’s Little Helper,” is a forgotten classic.  In fact, I remember it was one of the first episodes I watched live.  Bart goes too far with a prank and Homer and Marge put him on experimental meds that make him pay attention and become increasingly paranoid.  He’s convinced that Major League Baseball is surveilling everyone from a satellite, so he steals a tank to shoot it down.  When he proves that he was right, Marc McGuire shows up and distracts everyone by hitting some home runs.  This isn’t the most quotable episode, but the randomness is amazing.
Favorite Quote: “When I can’t stop fiddlin’ I just takes me Ritalin.  I’m poppin’ and sailin’ man!”

Episode 3, “Guess Who’s Coming to Criticize Dinner?” is a classic Lisa and Homer episode.  When Homer becomes the local paper’s food critic, he recruits Lisa to actually write articles for him.  Seriously, this season’s awesome!

Favorite Quote:  “You love Shake ‘n Bake.  You used to put it in your coffee.”


Looking at the next batch of episodes “E-I-E-I (Annoyed Grunt)” (aka the Tomacco episode), “Hello Gutter, Hello Fadder” (“Did somebody say a perfect game?”), and “Eight Misbehavin” (Apu has octuplets) are all classics.  I don’t know when the simpsons got bad, but it definitely wasn’t season 11.

Posted by KendallCast at 5:54 AM No comments:

On the second part of our journey through "Now! That's What I Call Music," we discuss the classic Backstreet Boys tune "As Long As You Love Me."


Posted by KendallCast at 7:08 PM No comments:

That's What We Called Music? - 1 - Together Again 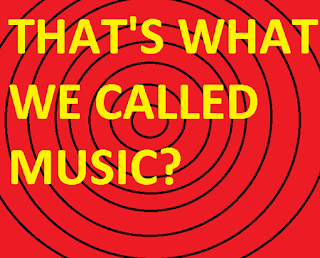 I'm extremely excited that this podcast is finally happening.  My wife Molly, my sister in law Sarah, and I are reviewing each song of the "Now! That's What I Call Music" series of CD's, or at least going as far as we feel like.  The first episode is a review of "Together Again" by Janet Jackson.  We're shooting for about 15 minutes per episode, so it's great for commutes, shorter chores, or anything else that takes 15 minutes.

Give the first one a listen!

Posted by KendallCast at 9:00 PM No comments:

Each week on the show I interview a regular person about the music in their life.  This week I spoke with Jason Baumgartner about his experiences trying to get a steady music education job and balancing that with raising a family.


Posted by KendallCast at 8:14 PM No comments:

We finally started Beast Machines!  After the first episode, I can confidently say that all fanboys are wrong and that Beast Machines is the best Transformers series.  Even if the other episodes are really bad... ask me again in 6 months after we finish the series.

Anyway, I know I don't always post War and Beast episodes here, because if you're not listening to the show already and you're on this page, you probably aren't planning on it, but just in case any of you guys do want to give it a try, this is a perfectly fine jumping on point!

Give it a try at audioentropy.com
Posted by KendallCast at 12:46 PM No comments:

Each week on the show, I interview regular people about the music in their life.  Matt Saunders was my trombone teacher in high school.  He took me through the college audition process and prepared me as much as one person could for what was in store.  Now he teaches general music at a college level, directs a community orchestra, and composes original work in his spare time.

Check out a number of Matt's compositions on soundcloud:


Posted by KendallCast at 7:10 PM No comments: