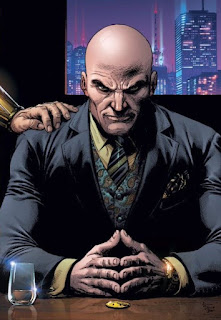 With the new year, I decided to write some blurbs about comics I enjoyed and am enjoying.  These are not in any particular order, and if you listen to The Pull List, there won't be too many bombshells, but that's okay.  If you're looking for some fun books to read, here are some options!

Since DC's Rebirth, Dan Jurgens has done some really fun things with the family dynamic of Superman, Lois, and their son Jonathon.  Unlike the main Superman book, which leans a little too far into the family aspect, Action is still a super hero book at its heart.  I especially enjoyed "The Oz Effect" story, where we learn the identity of the mysterious villain "Mr. Oz."  Also, the aftermath of that story gave Jurgens an excuse to bring in Booster Gold, the most criminally underutilized character since the beginning of the New 52.

I've always enjoyed Dan Slott's run, but I'll admit that he's been on the book a long time, and there have been some weak stories as well as arcs that just went a little too long.  This year, however, Slott had two stories that reinvigorated my excitement for his run.  "Clone Conspiracy" brought back Ben Reilly and just felt important in a way that doesn't happen that often in comics very often for me anymore.

Conversely, "The Fall of Peter Parker," takes us back to the shiftless screw-up version of Peter Parker.  I've told a number of people, if you've dropped Amazing Spider-Man at any point in the last few years, you owe it to yourself to give it another chance here.

In the aftermath of "Clone Conspiracy," a still slightly unhinged Ben Reilly runs off to Las Vegas to become a sort of anti-hero.  I can't quite put my finger on how he achieves it, but Peter David manages to make this book more than just another Spider-Man offshoot book.  Also, in Secret Empire, Las Vegas gets destroyed by Hydra.  Then, the way the book seamlessly deals with the aftermath is one of my favorite things about reading mainstream comics.

This year has been a crazy year for Captain America.  I'm not going to go into too much detail about the controversy, but suffice it to say, I enjoyed the entirety of Nick Spencer's run on the book, as well as Secret Empire.

The Secret Empire event felt like an elseworlds tale in the best possible way.  I had some problems with a few characterizations, especially Frank Castle, but it especially works if you think of it as a timeline where events have been altered by the Cosmic Cube(which it is).  It's just a fun sort of "Evil has won" story.  Also, unlike many of these types of events, it doesn't overstay its welcome or over-extend itself.

For those who have issues with Secret Empire, Mark Waid's new Legacy arc has done a solid job telling a back to basics Captain America story.  I was not totally on board after the first issue, but after the second issue, I'm interested in seeing where it goes.  Steve Rogers is just traveling across America and saving the day one small town at a time.

Easily the most anticipated comic of 2017 was Geoff Johns's follow up to DC Rebirth that is merging the Watchmen Universe with the DC Universe.  Watchmen is one of my favorite comics of all time, and this series is making a solid attempt at following it up.  It's not perfect, but if you just take it for what it is, it's incredibly entertaining and interesting.  The second issue has a scene where Ozymandias meets Lex Luthor, and Lex immediately points out the ridiculousness of the end of Watchmen.  I'm really hoping that it ends strong.

This has been a great year for Tom King.  His Vision series ended in 2016, but it received a fair bit of acclaim this year.  In addition, his Batman series has been all over comic book news.  Mister Miracle feels like it will be one of those books that hangs out on people's essential graphic novel lists for some time.  I don't know anything about The New Gods or Darkseid, but this book juxtaposes the insane world Jack Kirby created with a suicidal protagonist trying to live a more grounded life.

It's also just a weird book.  I'll leave it at that.

If this book wasn't titled "Punisher," and if the protagonist's name wasn't "Frank Castle," you wouldn't know it was based on a Marvel Comics character.  Garth Ennis tells a straightforward Vietnam War story in this book about Frank Castle's first tour in Vietnam.  It's dark and gritty without being overly graphic or violent.

I also recommend giving The Punisher's main title a chance if Frank working for Nick Fury in the War Machine armor sounds remotely fun to you.

Fans of the show are doing themselves a disservice if they're not reading Riverdale.  Honestly, I'm enjoying the comic much more than the second season of the show.  Each issue is self-contained and gives us a deeper story developing some of the show's characters.  Unlike the show, it's not afraid to get a little bit campy, but it still very much fits into the established tone.

R.L. Stine does some weird things with this book.  Man-Thing goes from trying to be a movie star to fighting elemental beings to save the planet from chaos.  It hasn't been critically acclaimed, but I really enjoyed it.  Also, each issue ends with a two page horror tale written by R.L. Stine, and these tales are excellent.