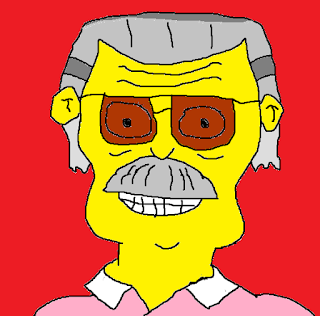 "Stan Lee came back?" "Stan Lee never left."  Yesterday's news gives this exchange from a classic Simpsons episode new meaning.  When I heard the news, I almost had to leave work for the day.  I literally had trouble reading all the tributes on twitter due to the tears in my eyes.  This is not something that happens to me regularly.

Considering how much of an impact his work has had on my life, I honestly don't know much about the man.  I've mostly just  heard the anecdotes he's given in interviews over the years.  I remember the one about how he chose to go by Stan Lee instead of his real name Stan Lieber, because he wanted to save his real name to put on something important.  Then there was the one where nobody thought you could make a teenage super hero, and teenagers could only be sidekicks.  I suspect some of the stories he told were more apocryphal than others.  After all, the idea that "People hate spiders, so you can't make a hero out of a spider" doesn't make much sense when Batman had been around for decades.  Nevertheless, the way he told those stories made you want them to be true.

The first time I realized just how important Stan Lee was to comics was back in 2006.  I used to get a stack of trade paperbacks from the library every Friday night and spend the evening reading through them.  One week, I picked up a collection of early Spider-Man.  Within the first 10 issues, Stan introduced The Chameleon, The Vulture, Doctor Octopus, The Sandman, and Electro.  Mysterio, Green Goblin, Kraven, and Scorpion all show up before issue 20.  In the nearly 800 issues that have followed of Amazing Spider-Man, only a handful of villains are as iconic as the batch introduced those early issues.  And that's just Spider-Man.

Stan Lee's work also represented the idea of the flawed super hero.  Before his work, super heroes were almost exclusively aspirational figures like Superman.  Since then even the characters who were around before have evolved to be flawed.  Superman is naive.  Batman is obsessive.  None of this would have been true without Stan Lee.

The man may be gone, but his work lives on as does the work he inspired.  Stan Lee never left.
Posted by KendallCast at 1:37 PM