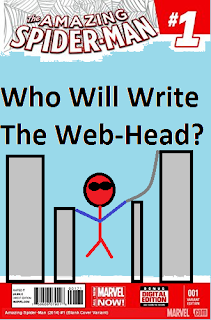 After an epic run of more than a decade, Dan Slott will finally be leaving Amazing Spider-Man after issue 801.  I'm scared to death of what is to come.  Spider-Man is my favorite character, and Dan Slott has been writing him almost the entire time I've been reading comic books.  He's the only character that I've followed since 2006, and I don't know what I'd do if there was an actual bad run of the book.

Obviously, the topic of who will replace Dan Slott has been on my mind a lot lately.  Here are the five writers I think are most likely to get the job.

A few months ago, there was a rumor that Spencer would be taking over after Slott left Amazing Spider-Man. I think he’d be a great fit, perhaps the strongest on my list. He demonstrated that he could write fun, street level characters with Superior Foes of Spider-Man a few years back. He also has the clout after his recent Captain America run.

Unfortunately, he’s associated with last summer’s controversial event Secret Empire. Since the end of that run, he’s been suspiciously absent from the public eye. This could be because he’s preparing for his Amazing Spider-Man run. It could also be him wanting to focus on his Image book, The Fix. I don’t doubt that he’ll be back writing big name characters sooner or later, and I honestly enjoyed his Captain America run and Secret Empire. Still, Marvel has clearly been trying to distance itself from anything related to that event, and Nick Spencer may be a casualty of the controversy.

Avengers Arena was one of my favorite comics of 2013. Hopeless captured the voices of new and established c-list characters better than anyone since Dan Slott’s Avengers: The Initiative. I’m not usually a fan of team books. If I try a book for a particular character, that character usually fades into the background in favor of a character I don’t care about. Alternatively, if the book has a better balance of characters, it’s difficult to develop any of them. Somehow, Hopeless was able to tell this “Hunger Games but with Super Heroes” story flawlessly.

Since then, Hopeless has had acclaimed runs on Spider-Woman and All New X-Men (along with its spiritual successor X-Men Blue). Especially since his X-Men run, he’s one of Marvel’s go to writers for books about young, light-hearted heroes.  Right now, he’s in a similar situation to where Chris Yost and Christos Gage were a few years ago. If he doesn’t end up on Amazing Spider-Man, he’ll be writing Captain America, Thor, or another a-list character one of these days.

Maybe the most boring choice on the list, Soule has been writing whatever Marvel will give him for the past few years. By the law of averages, if you randomly grab a comic from the last three years, it was probably by Soule. Most notably, he’s had runs on Daredevil, various Star Wars titles, She Hulk, and Inhumans. At one point, while he was still managing his law firm, he was writing five different Marvel titles per month. I really enjoyed Death of Wolverine and She Hulk was pretty good, but most of the stuff he’s put out since has been pretty mediocre.

The biggest reason I doubt Soule will be taking on Amazing this summer is that he’s already got a big event that he’s spearheading. He’ll be putting a lot of energy into this summer’s return of Wolverine event (which I’m very excited for). Not to mention, Marvel still needs someone who can do a serviceable job on books that nobody cares about. I’m coming off as pretty negative on Soule, but there is something to being able to do a decent job on literally any character.

If I were a betting man, Zdarsky would be my choice, whether I like it or not. His work on Spectacular Spider-Man shows he knows the character, and Marvel Two in One is a solid book that can’t last more than an arc or two, since it’s setting up the return of The Fantastic Four. In addition, with those two titles, he’s shown that he can write something with more depth than his terrible Howard the Duck run.

Honestly, I don’t have a lot more to say about Zdarsky. He’s already on the Spider-Man JV team. It’s only logical that he’s be pulled up to varsity when Slott graduates to Iron Man.

Although people always bring up Jason Aaron’s recent trifecta of classic runs, Southern Bastards, Thor, and Star Wars, he’s written just about every character in the marvel universe in the last 15 years. In particular, I’ve always associated him with Wolverine, but his Incredible Hulk run is a great read, and I even read some of his Black Panther run after seeing the movie. Right now, he’s not writing a lot, and I don’t believe he’s ever written a Spider-Man book.

That said, my gut tells me that he wouldn’t be a great fit on Spider-Man. While his books vary greatly in style and tone, they all share a certain grandiosity and darkness that just does not fit with Peter Parker's. I’m sure he would do a good job, but he’s just not my choice for the book.

I’m sure that whoever gets Spider-Man will do a great job. The nice thing about books like Spider-Man, Captain America, Batman, etc. is, they only put the best people in the industry on them. If it were up to me, I’d probably go with Nick Spencer. In spite of his association with Secret Empire, he’s got the right mix of experience and tone to make a great Spider-Man book! See you in the funny pages!
Posted by KendallCast at 10:04 AM